If the Shelton School district is delayed or cancelled, the meeting will be cancelled. 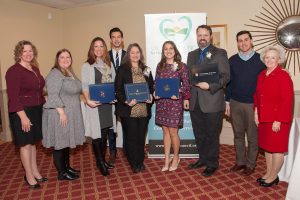 Photo Credit:  Fred Ortoli
Beginning from the left:  Co Chair, Susan Agamy, Ellen Graham, Shaye Roscoe, Ben Florsheim, Remy Kocurek, Jennifer DeLeon Prutting, Ian Parsells, Jimmy Tickey and Chair, Patricia Tarasovic.
**********
December 5th, The Valley Council held its 24th Annual Breakfast Meeting which took place at Brownson Country Club, Shelton, CT.  Patrick Charmel, President/CEO of Griffin Hospital was the key note speaker. Chair, Patricia Tarasovic and Co Chair, Susan Agamy, presented four community service awards. The Agency/Program of the Year Award, The Richard O. Belden Award, and Lewis Savitsky Staff Excellence Award. In addition, Certificates of recognition were presented from the office’s of Senator Richard Blumenthal, Senator Chris Murphy, Congresswoman Rosa DeLauro.
The Agency/Program of the Year Award recognizes a nonprofit agency or a program within a non-profit agency whose staff and volunteers exemplify excellence in the community and whose services have made a significant and lasting contribution to the health and well being of the residents of the Lower Naugatuck Valley.
This year’s award was presented to St. Vincent DePaul Food Pantry.  Their mission is to provide food to families in need here in the Valley. They successfully operate a thrift Shoppe which provides funds to purchase food. This year they went over and above their mission as they engaged the Valley community to join together and help hurricane victims. They sent two completely full trailer trucks to aid people in need. Not only is their day to day mission exceptional but their reaching out exceeded its mission in such a heartfelt way. Remy Kocurek accepted the award on behalf of their organization.

The Lewis Savitsky Staff Excellence Award, was presented to two individuals for their extraordinary service as an employee in the non-profit community who has made a positive impact on the quality of life of residents in the Lower Naugatuck Valley.  The award is named in honor of Lewis Savitsky, a long time employee of Valley United Way who was active not only with Valley United Way, but also with multiple groups on the community.

Jennifer DeLeon-Prutting joined the Boys & Girls Club of the Lower Naugatuck Valley when she was eight years old. It was immediately apparent to all that Jen was an incredible individual. She quickly became an active participant in many of our activities, excelling in our youth leadership programs when she was old enough to join them. Jen’s sincere kindness and eagerness to help others landed her the role of both president in both Torch Club and Keystone Club, where her hard work, innovative ideas, and creative talents led her group to many accolades.

In 2005 Jen was named Youth of the Year, the highest honor a Boys & Girls Club can give. This is the Boys & Girls Clubs of America’s premier recognition program for Club members, promoting serving to Club, community, and family; academic success; strong moral character; life goals; and poise and pubic speaking ability. Jen exemplifies all of these qualities and more while remaining a humble, genuine individual.

Through the years Jen has become an integral part of our organization, securing a position as one of our elite counselors and eventually joining our full-time staff. Jen has always shared her skills, sincere advocacy of children, and the importance of the ability to multi-task. She is currently the Unit Director of our Raymond P. Lavietes Unit, where she successfully and effectively manages staff, membership, and programs while creating a positive relationship with parents and community leaders.

As a licensed social worker, Jen is well aware that advocating for middle school children brings some unique challenges. This age group must navigate their way through a confusing and often awkward time, and Jen provides encouragement and practical assistance for members who struggle with a variety of concerns. It seems she is always able to make the necessary adjustments in her counseling methods and techniques to successfully assist these members.

Jens goal is to provide a safe haven for our members and their parents. Just by doing what she does every day, she touches the lives of all the kids who walk through the door guiding them, leading them, teaching them. With her unique social work experience, Jen is able to bridge the gap of kids and parents needing something but not knowing what that something is.

Ian Parsells was also honored with the Lewis Savitsky Staff Excellence Award.
Ian earned his BA in Literature from Ramapo College and started working various jobs including book editing, proofreading, tutoring, public relations, and marketing, but he never felt satisfied with the substance of his work. In 2008, he decided to go back to school to earn his Masters. During his study, he started working at the public library in Glen Rock, NJ and immediately felt that missing sense of satisfaction.

Fresh off earning his MLIS from Rutgers University, Ian came to the Valley in October 2011 to take over as head librarian of the Derby Neck Library. During his six years at the library, his accomplishments include increasing public computer access, expanding media to include Blu- ray, revamping the library’s Website, more than doubling public seating, diversifying the library’s programming, and overseeing the installation of the library’s new circulation desk. He has also made a concerted effort to take an active role in various Council initiatives and other community efforts as he sees it as a critical role for the library and its mission. Currently he sits as chair of the Council Youth Committee and member of the Communications and Executive committees.

As a member of the Communications Committee, Ian went above and beyond working on the logo contest. He reviewed and vetted all entries and researched and designed numerous options for the new banner. In addition, he took on the leadership role on the Executive Committee before becoming a committee chairperson. He has assumed leadership responsibility for the Youth Committee.

Since 2013 Ian has been volunteering preparing dinner and helping with cleanup at Spooner House.

Outside of work, Ian enjoys playing disc golf and spending time with his wife Melissa and their three dogs at their home in Shelton.

The Richard O. Belden Community Service Award is presented to an individual or organization whose efforts have made a significant contribution to improving the quality of life of Valley residents in the Lower Naugatuck Valley.  It is presented in honor of the late State Representative Richard O. Belden and his high standards of ethics and community involvement. The Council will present the 2017 Belden award to

Joseph A. Pagliaro Jr.  Joes involvement with the community began with the Shelton Board of Education, the Parent Child Resource Center, and Junior Achievement Valley Division. Following his fathers death in 2004, Joe joined our Board of Directors and never looked back. When he was approached in 2013 to be Board President, he accepted without hesitation, happy to serve our kids in any way he could

Since then Joe has served on our personnel, executive, and development committees, and is now in the midst of his second term as Board President. He’s been a generous supporter of our Back-a-Kid annual appeal each year, as well as our annual Service to Youth Awards.

In addition to his support of our Club, he has continued his service with the Valley United Way, the Valley Community Foundation, the Gift of Life Foundation, St. Lawrence Parish Council, St. Joseph’s High School, The Recreation Camp, Griffin Hospital, and St. Catherine Academy.

Joe served as our Board president for his full two-year term, and was serving as Chairman of the Board when our organization found itself without a Board President. Joe graciously accepted the position of President again without a second thought, regardless of the time commitment it required. Joe has literally never said no to us.  Shaye Roscoe accepted the award on behalf of Joseph Pagliaro Jr.