Welcome to The Valley Council, a partnership network of nonprofit agencies that serve the residents of Connecticut’s Lower Naugatuck Valley.  The Valley Council works to strengthen the capacity of our member agencies and community partners to provide high quality health and human services in the Valley region.  By coming together to build relationships, exchange information, share resources, identify community needs, and plan for community solutions, we help to improve quality of life for Valley residents.

If you are a representative of a nonprofit agency serving Valley residents, learn about the benefits and process of becoming a member of the Valley Council.

If you live or work in the Valley, learn about how to access services and/or how to support the work of Valley nonprofits by volunteering, donating, or participating in community efforts.

The Valley Council celebrated their 25th Anniversary honoring  their past Chairs; “Pillars of the Past”.  A history of the Council was presented by Jack Walsh & Marilyn Cormack. They along with William “Bill” Powanda contributed to the path that helped shaped the Valley Council.  John Yeager was presented with the Lewis Savitsky Staff Excellence Award.  The Food security Task Force was presented with the Program of the Year Award and Robert D Scinto received the Richard O. Belden Community Service Award.  Patricia Tarasovic of the Valley United Way was honored with Outgoing Chair Award.  We would like to thank our Sponsor, Valley Community Foundation.  A special thank you to State and Local Legislators who honored our awardees with proclamations.   Thank you Jimmy Tickey, Ellen Graham, Ben Florsheim, Senator George Logan and the State of Connecticut General Assembly for their Official Citations to our honorees. END_OF_DOCUMENT_TOKEN_TO_BE_REPLACED 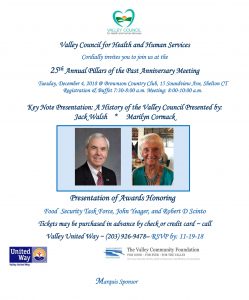 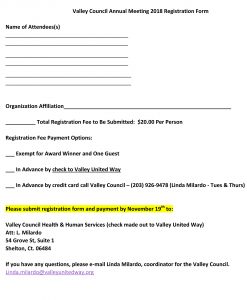